One of the other guys from the British Motor Club lent us a jigsaw puzzle featuring a Morris Minot!! However, the puzzle was not the picture on the front of the box, but a view of the Morris from the opposite direction. There was 2 clues, showing the characters on the front of the puzzle would actually be placed on the other side of the puzzle to what they were placed in the picture. So here are some photos of Shaun trying to do this puzzle. He spent a lot of time on it, with some help from whoever was in our home at the time. I had almost finished it yesterday, but the last 2 pieces just didn't fit....so he fixed when he got home. 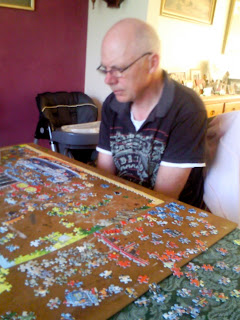 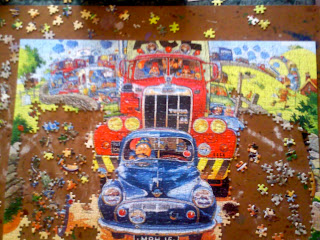 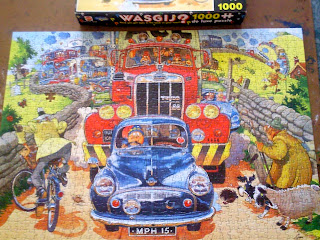 There was just one piece we can't find. So don't know if it was already missing or if we have lost it....hope it's not the latter!!! =(
Posted by Debbles Dabbles at 12:32 PM