Sometime back, our youngest, Tamazin had her 2nd car involved in a car accident. A copy of her first car's accident where she got squashed between 2 cars. Both cars have been written off. It has taken quite some time now for the money to come through from the insurance company, which has been a little frustrating but God's timing is always perfect.

Yesterday on the bulletin board at Shaun's work there was advertised a Toyota Echo 2000 model for sale for $2000. Shaun checked with the red book and saw it was a good buy. So straight after work we headed over to check it out. The woman who was selling it was not living at where the car was but actually lived quite some distance out of town so had to organise for everyone who wanted to look at it to come at the same time. Thankfully, we got there first. However, we had not been there long before someone else turned up. Looking at the car we knew it was a bargain so had to make a rushed decision without Tamazin even seeing the car to purchase it. We did not haggle at all but quickly informed the lady we would take it.


The car had been sitting out the front under a gum tree since her mother's passing (it was her mother's car) and the neighbours kids had been over and let the tyres down and broken into the car so she just wanted to get rid of it there and then. So she asked us to take it and pay for it today.....how trusting!! The battery was so dead we had to jump start it but not only that it would drive a little way and then just die and we would have to jump start it again. We made it JUST to the petrol station to get air in the tyres but Shaun then went home and got Tam's battery out of her smashed car and bought it back to the garage. It drove lovely the rest of the way home.

Sent a pic to Tam who decided yes, she would keep it after an initial 'Why did you buy it without me looking at it?' which I explained. I told her if she didn't want it her brother & his wife would have gladly taken it. It needs a good clean both inside and out and a good service, but we can surely say this is yet another gift from God. Thank you God for providing yet another car for this family. 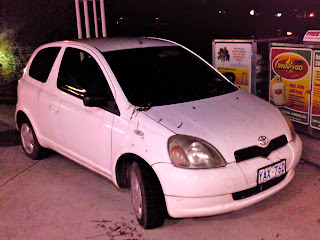 Posted by Debbles Dabbles at 8:21 AM