What a fun workshop!!

Hi there friends. My friend Chriss & I both booked a Stampin' Up workshop during salebration. Chriss had hers on Saturday 29th Jan 2012 at the home of our friend (& Stampin' Up consultant) Ann Craig. Chriss chose a theme of 'Shimmer & Shake' so upon arrival we all got a yummy milkshake with a take home curly wurly straw. We also had yummy fruit kebabs, or chocolate muffins. I had 2 kebabs they were sooooo good. Chriss had asked that we do an easel card for our make and take. However to start with Ann went through a few techniques that some of us may not have tried before. We started with a piece of plain white cardstock and then chose a stamp which we inked with the markers rather than the ink pads that way we could use several colours rather than one. I chose a stamp with a pear over some writing, inked it up then stamped. It worked out rather well I thought, but decided to give it another go with colours for a friends birthday, she likes blues, turquoise, those kind of colours. Worked well again. Then we punched out or cut the image so we could place it over a 9cm square. We then stamped up a background on that 9cm square. I of course, had to ink around both the background square as well as the image. Then I mounted the square onto a piece of coloured card stock which I trimmed down. Then Ann showed us how to make a lovely frame using one of the SU punches, slitting it and putting the corners into it. We were all very pleased with this look. 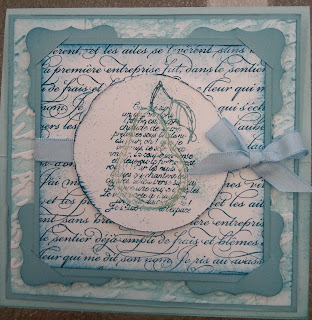 Ann said we had to finish this as we still had to make our take away project, the easel card. We said we wanted to turn what we had already created into our easel cards. She was happy enough with that and so we all did. Everyone's was very different to each others. I was very happy with the end result. I did some dry embossing that I used ink with to make it stand out more and layered that onto card stock. Attached what we had already created onto foam dots to raise it up (after I had added ribbon) then attached it all to the actual card. To create the easel affect, cut out card to make square card. Fold in
card in front, then take the front of the card and fold in half again. Using double sided tape, tape only on the bottom half of the front of the card and attach the front square. On the bottom of the card add something that will not only look nice, but hold back the front of the card, like so. 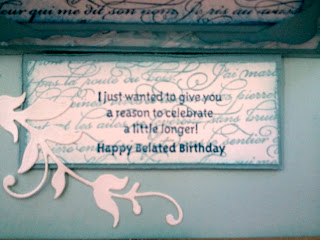 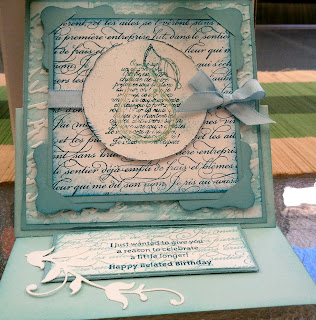 Some challenges I have entered this into are:
Lollipop Crafts - Anything Goes
Make it Monday - Anything Goes
My Craft Spot - Anything Goes
Birthday Sundaes - Easel with birthday sentiment
Sentimental Sundays - Dry Embossing
Stampin' Sisters in Christ - Your Style
Posted by Debbles Dabbles at 11:05 PM