My son and his partner Lani, both love Steampunk. What is that you say? Well check it out. Here is some images to show you
http://www.google.com/search?q=steampunk&hl=en&safe=off&client=firefox-a&hs=q9H&rls=org.mozilla:en-US:official&prmd=ivns&tbm=isch&tbo=u&source=univ&sa=X&ei=-3FtTpjZEo3BiQfF_sXTBA&ved=0CEoQsAQ&biw=1842&bih=1131
but according to Wikipediea the explanation is such:

Steampunk is a sub-genre of science fiction, fantasy, alternate history, and speculative fiction that came into prominence during the 1980s and early 1990s.[1] Steampunk involves a setting where steam power is still widely used—usually Victorian era Britain—that incorporates elements of either science fiction or fantasy. Works of steampunk often feature anachronistic technology or futuristic innovations as Victorians may have envisioned them, based on a Victorian perspective on fashion, culture, architectural style, art, etc. This technology may include such fictional machines as those found in the works of H. G. Wells and Jules Verne.
Other examples of steampunk contain alternative history-style presentations of such technology as lighter-than-air airships, analog computers, or such digital mechanical computers as Charles Babbage and Ada Lovelace's Analytical engine.
Various modern utilitarian objects have been modded by individual artisans into a pseudo-Victorian mechanical "steampunk" style, and a number of visual and musical artists have been described as steampunk. Anyway, enough of that.

So when it came to her birthday I thought I would make Steampunk the theme of her card. So went over and bought a digi from Kenny K. I have only just put my order in for some copic markers so used my old markers and coloured pencils to colour the image. Wasn't at all happy with it, so decided to emboss over it. I also embossed the background patterned paper with Tim Holzt's steampunk embossing folder, & inked over it so the gadgets could stand out a bit more. Of course, I love to sponge the edges and did so with all if it including the main card. For embellishments I have punched out my own flowers from patterned papers and inked them. Added a flourish, again a Tim Holtz die cut. Of course, last touch, a Layers of Color butterfly. Anyway, I thought it came together in the end. I think at least Lani liked it! 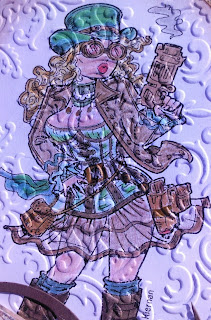 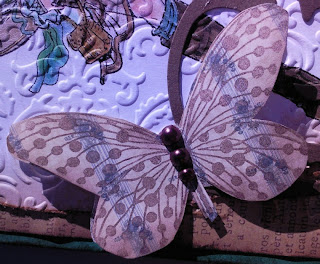 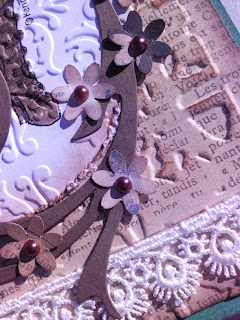 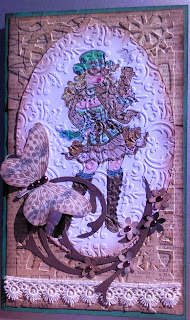 Some challenges I have entered this into:
Crafting When We Can - Anything Goes
I Did it Creations - Anything Goes
Allsorts - Flowers & Swirls
Catch the Bug - Punches & Die Cuts
Sweet n' Sassy Digi - Sport
PaperWorks Co - Colour inspiration
Just for Fun - Vintage

Posted by Debbles Dabbles at 1:00 PM