Yesterday at lunch time my wonderful husband of 27.5 years had a major brain hemorrhage, his 3rd, & the 2nd in less than 12 months. Again, completely different symptoms from both the first and second. He felt suddenly ill, hot, & oh, so sweaty. Sore neck, spinning room. So I called an ambulance. They worked on getting him both pain relief and tried to help the vertigo before being able to move him.

I had enough time to quickly post on my fb wall asking for friends and family to pray, that it looked like Shaun was having a brain bleed and that we were on our way to hospital in the ambulance. We met 2 out 3 of our children there, the other was in Sydney for the day. 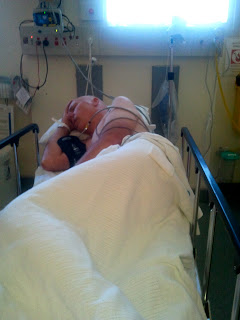 Despite his history of having an Arterial Venus Malformation, with 2 aneurysms on it, all 3 things could bleed, the hospital took 2 hours to do a CT scan and diagnose the major brain bleed. Shaun was deteriorating, going further & further into sleep mode, heading towards unconsciousness. His speech was becoming more & more slurred and his movements became harder. They told me they would operate to place a thin drainage line into his head to drain off the excess fluid which was causing the aforementioned symptoms at 9pm....8hrs after the bleeding begun! So I rushed home with a friend, and tried to contact with the only neurosurgeon I trusted, who was the only one who had operated on Shaun's head previously, and who was with us during the 2nd brain bleed in Melbourne last year. I could only leave a message as it was his day off and I prayed that he would return my call. (He did later that evening....thank yu Dr Khurana) It was while I was home that our daughter, Tamazin called to say she had just filled out all the paperwork and that they were taking my husband, Shaun to surgery now.

By the time I got up there, Tamazin's good friend, Courtney was there with dinner for us.....yummy bolognaise and garlic bread...oh & some chocolate!! We had dinner and went to wait for Shaun to come out of recovery to the ward. Finally at 10.30pm I asked if I could go into recovery and see him, which I did. He really was out of it though, & I only spoke briefly to him before heading home for the night, sleeping with my phone next to me, and checking it frequently through the night.

I called the hospital about 9 o'clock this morning to see how Shaun was doing (not able to visit til 11am....rules!!) I was told that he was doing ok and had eaten a little breakfast. Our son, Tristan who had returned from Sydney dropped in & then took me up to the hospital while the others stayed to do some stuff around home, including taking the dog who had been most diestressed at being alone so much, over to friends. We met his wife at the hospital and headed up to see Shaun. Although being somewhat uncomfortable, he seemed ok, still not really with it, but much improved. 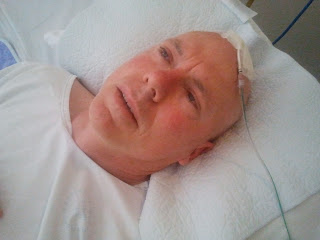 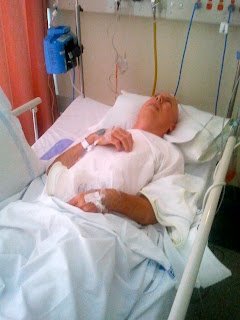 Tristan & Carissa headed off and then Tamazin came back in. Shaun's lunch arrived and he had some before it was time to leave for a couple of hours...rest time (rules....11 - 1). I went to the cafe and Tam went to friends. Several friends joined me at the cafe, firstly Rick & Anne with their girls, the Denis & Marilyn, who also came up to see Shaun briefly. It was amazing to see how much more he had improved just in 2 hours. He was more evenly coloured, brighter, more awake and doing well.
We have truly seen the prayers of many faithful friends and families, strangers across the globe answered. I had allowed myself to trust God no matter the outcome.....He gives, He takes away, still I will say, Blessed is the Name of the Lord.....
The journey is only beginning. The bleeding needs to stop. I know I am not alone. God is there at our side, journeying with us, sustaining us through the gifts of friends, the prayers of strangers. I am looking forward to Shaun's mum arriving on Tuesday. Hoping that his sister can come later too. Will keep you posted!
Posted by Debbles Dabbles at 11:22 PM